TMC stands for Ternary Molybdenum Chalcogenide. This is a class of compounds with the chemical formula MxMo6X8 where M is a metal and X a chalcogenide. These compounds are also nown as “Chevrel phases”, according the French chemist Roger Chevrel, who discovered them and determined the crystal structure.

TMC’s are low temperature superconductors with a critical temperature up to 15 K. The most interesting compound for applications is PbMo6S8 (PMS) with an upper critical field in the range of 50 T @ 4.2 K.

Industrial development of TMC wires go back to the 1980s with companies like Alstom (France), Mitsubishi (Japan) and Plansee (Austria). The most advanced process was developed by Plansee carried out on a production line for molybdenum wires.

Critical current densities (at that time) were insufficient for practical applications. Two main raisons are identified:

- the powder in tube method (PIT) did not allow the correct connection between grains.

- the starting powders had a large distribution of the critical temperature (corresponding the synthesis at 1150°C / 50 h in the following figure). Such inhomogeneous material is at the origin of diffusion processes along grain boundaries which resulted in reduced superconducting properties at grain boundaries (granular behavior). 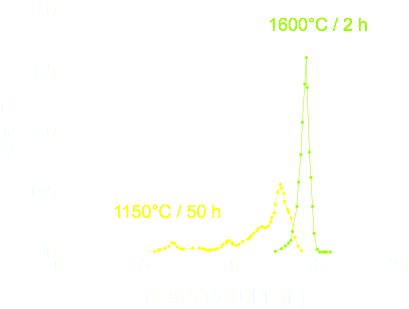 Today, there is a new proprietary wire manufacturing process starting with homogenous TMC bulk material, i.e. the 1600°C / 2h synthesis in the proceeding figure. The TMC bulk can be deformed directly to a superconducting wire by extrusion and drawing at elevated temperature. No reaction heat treatment is required after wire drawing! Patents were recently granted for the US (2018: US 10,128,428) and for Europe (2019: EP 3105799).

​​​​​​​The expected critical current density (in the superconductor) is estimated by the latest measurements (N. Cheggour et al. JAP 81, 1997) and applying a temperature scaling law, as depicted in the next figure. Additional credit for the estimate comes from the measurement of the critical current density inside high quality grains (intra-grain Jc) by D. Cattani, IEEE Trans. Mag. 27, 1991. 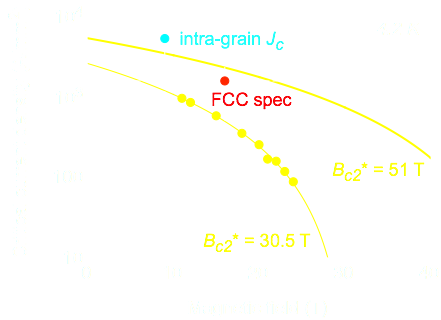 Under the assumption of a critical current density without limitation by granularity and large scale production, the performance index $/kAm as a function of magnetic field for a TMC conductor in comparison to commercial low and high temperature superconductors is summarized in the following figure. The performance index can be calculated according the below mentioned equation with rho the mass density and Jeng the engineering current density. 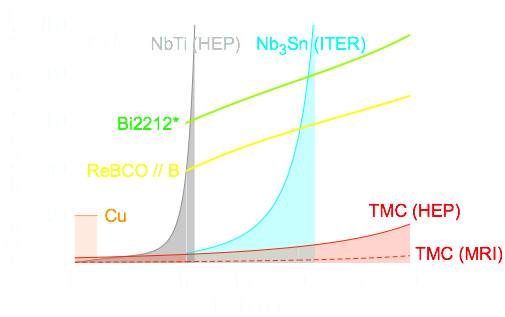 For further information (klick on title):